Buffett claims gleefully that in investing, odds are stacked in your favor. While factually he is right, he may be making it sound too simple. That could lay a trap for lay investors. Charlie Munger is more forthright and candid when he says, “It is not supposed to be easy; anyone who finds it easy is stupid”.

Complexity arises from the inherent contradictions. Let us look at some of them as eloquently elucidated by Howard Marks in his memo in 2015:

Add to these, the challenges that come frequently while deploying cash in a falling market. After holding cash for a reasonably long time while the market kept rising, when the market turns and cracks, it will be tempting to quickly deploy when valuation turns attractive. If the market undershoots further, as it normally does, depleting cash too quickly tempted by attractive valuation could hurt the portfolio. Alternatively, if the market bounces quickly without undershooting further, decision to deploy quickly could prove to be a genius one. Both are possible outcomes in any market ( irrespective of the economic fundamentals at that point of time) depending on to what extent the fear cycle plays in the given point of time.

Our own recent experience has a lot to offer on what makes investing so hard. At the top of the markets in Nov-Dec, we did sense froth in the broader markets and decided to prune positions to raise cash levels to 20%+. Going by the extent of subsequent fall in Jan-Feb, in hindsight, one could argue that was not an aggressive cut in positions, though pruning did help in widening out-performance. The inter-play of fear cycle and the market swings make decision making very complex and challenging. Fear of missing out (FOMO) in the bull cycle and Fear of further fall (FOFF) in the down-turn create a havoc on the rationality that results in unpredictable  movements in the markets, mostly manic in nature.

The next logical question is what can make investing less harder. While there is no magical silver bullet, there is a way to make it less complex. Value investing and the concept of Margin of Safety can come to the rescue. Following a decision making process based on Intrinsic value with target price based on Margin of Safety can make it more objective and thus less complex. That is probably the reason why Buffett said that the most important three words in investment business are “Margin Of Safety”. This process, though more objective and less complex, is not without its challenges. The hard part here comes more from the need for emotional efficiency. Developing emotional qualities (such as listed below) that bring this efficiency may sound simple, yet takes good part of lifetime to harness:

For superior results in investing, there are no short-cuts. To quote from Howard Marks memo, “So, in the end, there is only one absolute truth about investing. Charlie is right : It isn’t easy”

Flight to Safety is driving yields lower in DM bonds and stocks lower in EMs. Markets have moved from under-pricing risks to over-pricing them and thus creating attractive value opportunities for long-term investors.

For all the high decibel sound bytes that surround the Fed and RBI rate actions, reality rarely lives up to the initial hype. Every Fed rate hike cycle had created fears that borrowing costs will shoot up in the system. The recent hike in December was no exception. But, the bond markets on the ground have played a different script. Ten year US treasury yields have fallen by over 70 bps since the time the Fed rate hike was announced in Dec. So much for the market noise that always deafens every Fed event.

Back in India, bond market’s response to RBI’s much hyped rate cuts has been on similar lines. Ten year Gsec yield is back to where it was before the RBI started the rate cutting cycle last year. Below charts on both US and Indian 10 year yields capture the trend brilliantly. 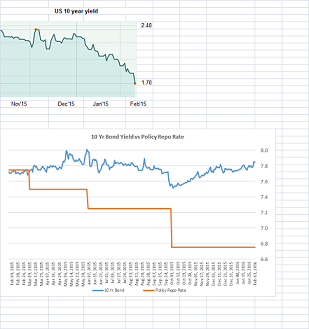 Why have the yields become rebellious to central bankers dictum. In normal times, they are more amenable to monetary policy actions. But times are anything but normal now. Markets are on a risk-off mode. Flight to safety is driving funds out from risky (emerging market) assets to safer havens such as German Bunds, US treasuries etc and thus driving yields lower in supposedly safer DM (Developed) markets while depressing bond prices (rising yields) in emerging markets including India.

Markets have moved from under-pricing risks to over-pricing them as it do periodically on unknown fears. Such mispricing creates opportunities both in bond and equity markets for investors who have little longer horizon than few quarters and have built sufficient cash cushions at the top of the markets when risk trade was its peak.

Valuations in equities have turned very attractive for long-term investors. It is time for accelerating the allocations in Indian equities. To say in tennis parlance, when the market throws a short ball, it is time to hit a winner. Or as Buffett says, Swing it hard when it is a fat pitch!!.

China is once again at the center of global jitters. New Year has a nasty start for global markets. The root of the malaise is in the volatile data points that are popping out of China at a periodic fashion. Maligned manufacturing PMI data released in the Ist week spooked the markets which were already edgy on crumbling crude. Market’s adjustments to volatile Chinese data points (economic) will be anything but smooth. China’s inept handling so far of both stock and currency markets does little to inspire any confidence.

Fears of Chinese slowdown are real and the transition from investment led to consumption led economy will not be without pains. Eerie resemblance to 2008 crisis has caused markets to fret a full blown financial crisis from hardening growth and ballooning debt in China. Such fears are far fetched and global economic fundamentals, though fragile, do not suggest such a colossal slump.

As for the markets, they are a different breed all together. Markets rarely adjust  in an orderly fashion. They undershoot and overshoot all the time because of their inherent self feeding nature. It swings from seeing only positives to seeing only negatives. Technicals override fundamentals in the short-term. It is always possible that the fear cycle can feed on itself to wreck the markets into manic meltdown, not the case so far though.

When there is basket selling by FIIs, rarely markets get differentiated. No markets are spared of this madness. India is no exception and it might suffer one of its worst losses. In no coincidence, India saw one of the worst ever FII outflows in the month of January since 2008 with over $2Bn selling by FIIs. When dust settles and sanity returns, markets start differentiating. India is well placed to emerge as one of the few bright spots in the weakening global macro. India is in such a stage of an economic cycle where interest rates are coming off with moderating inflation and investment cycle just turning. While China’s slowing growth and its management will be a huge overhang for global markets, over time, flows will gush into promising markets for its returns, slowly decoupling from china. India will stand to gain from that decoupling.